In essence, I make my living typing. To minimize the damage I inflict on my hands with the amount of typing I do, I use an ergonomic keyboard. You can read more about my choice by following this link.

A significant component within a keyboard is the keys, or more specifically, the key switches—the boxes containing the contacts that meet when a key is pressed sending a signal telling the computer which letter was just typed.

With higher-end keyboards—such as the Kinesis Advantage, the ErgoDox, the Keyboardio, or specialized gaming keyboard—you get mechanical switches. Mechanical as opposed to membrane switches that you find in most keyboards.

Mechanical key switches offer several advantages—in particular, you can choose the switch that’s right for you. So what factors should you consider when choosing switches? 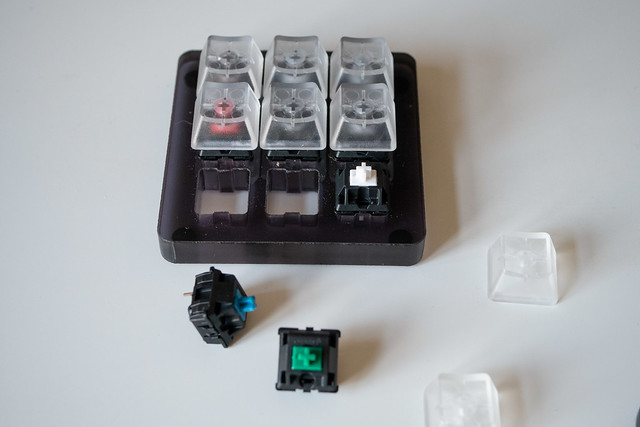 Perhaps the most important factor in choosing your key switch is the force that is required to press the key.

Like many typists, I have a preference for lighter keys, but some people prefer something that gives more resistance.

The second factor is the sound—or as some people think of it, the noise.

But there are other sources of noise when typing. If a mechanical key “bottoms out” there is a sound as it hits the buffer. Also when a key is released and springs back, there is a sound. Both of these noises can be addressed:

The third main factor to consider when contemplating key switching is whether the response is linear or tactile.

A linear key’s response is consistent through the entire travel of the key.

Which is better? It’s really a matter of taste and feel.

Beyond the ability to get a key that feels and sounds right, most non-mechanical key switches tend to have a short travel and then “bottom out” in order to activate. This means that when you type you have an effect that is akin to banging your fingers on a solid horizontal surface. In the short-term, this isn’t a problem, but over the longer-term, this can increase stress on finger joints.

By contrast, mechanical switches activate roughly halfway through their travel, so with practice, you can learn to apply minimal force and avoid the hard impact that comes with bottoming out. This activation happens at around the halfway point irrespective of whether the key is clicky, tactile, or linear.

When you start talking about, and looking into, mechanical key switches, you are bound to hear the name Cherry, often followed by a color (Cherry blues or Cherry browns, for instance).

Cherry is a company that makes key switches, perhaps the best know range is its MX Series. The colors come from the color of the key stems on the switches and indicate the model/feature variants (blues are clicky, browns are tactile and require a lighter force, and so on).

Which Key Is Right For Me?

If you’re interested in a higher-end keyboard, it’s well worth taking the time to find the switch that suits your preferences. And if you’re not sure which switch is right for you, then head over to Amazon and search for: mechanical keyboard switch tester. These often come with four key switch variants or—as with the one in the photos earlier in this piece—nine key switch variants.